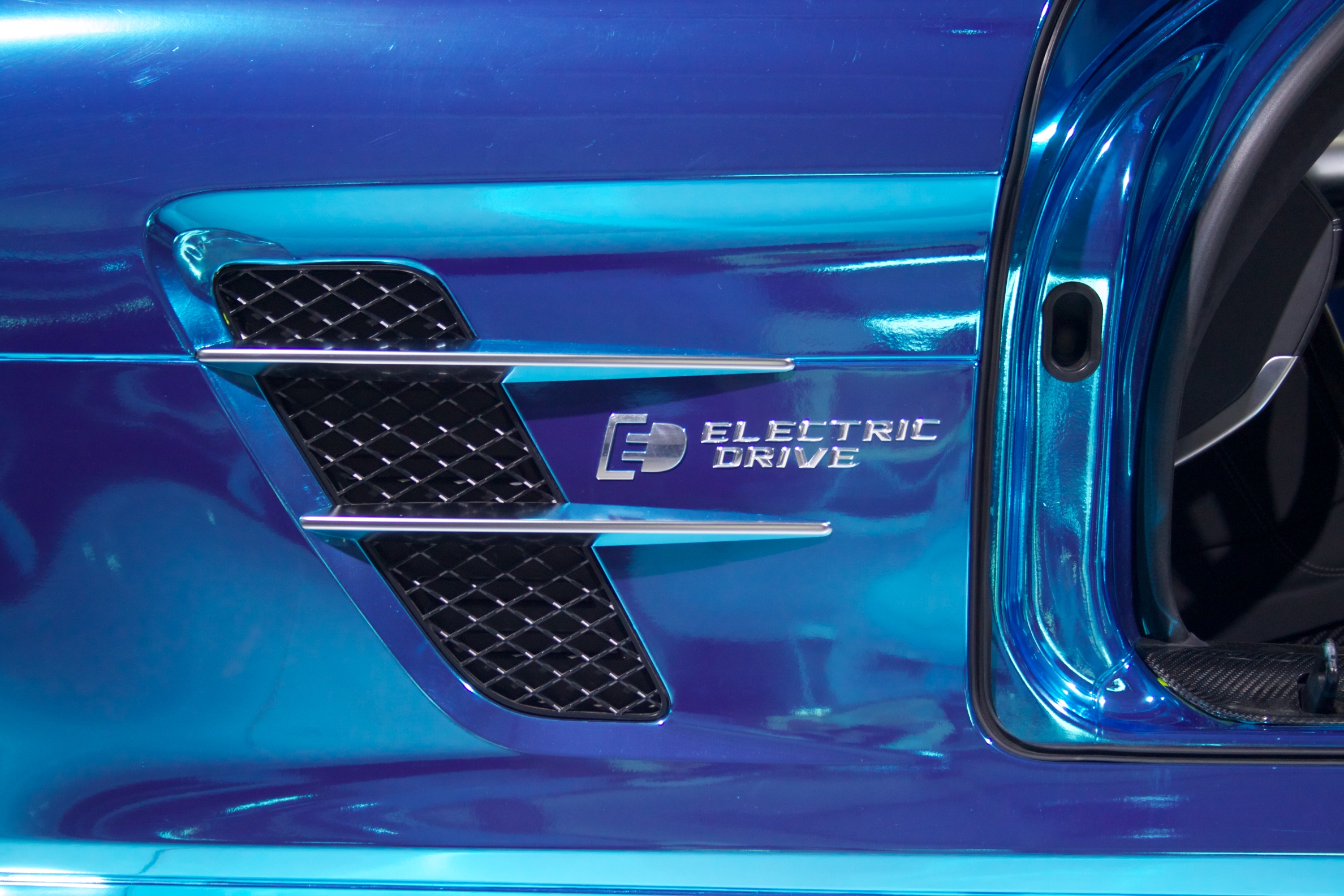 This is a stunning example of what an electric car can be.

And it has a price tag. Yes you can order an SLS EV just £350 K. The car was in the main Mercedes stand and drawing a huge amount of interest. It also looked exciting in the glare of the English sunshine. 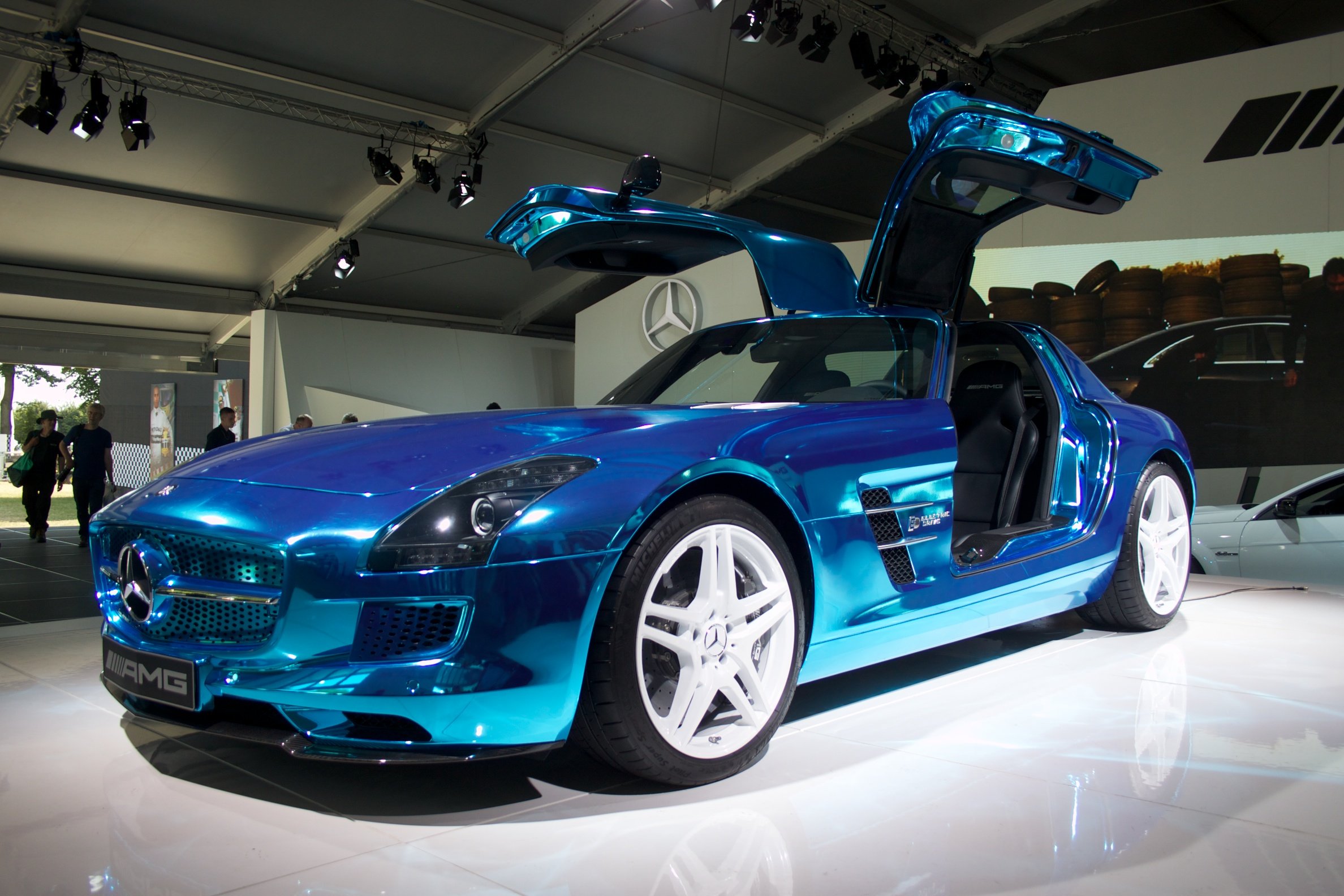 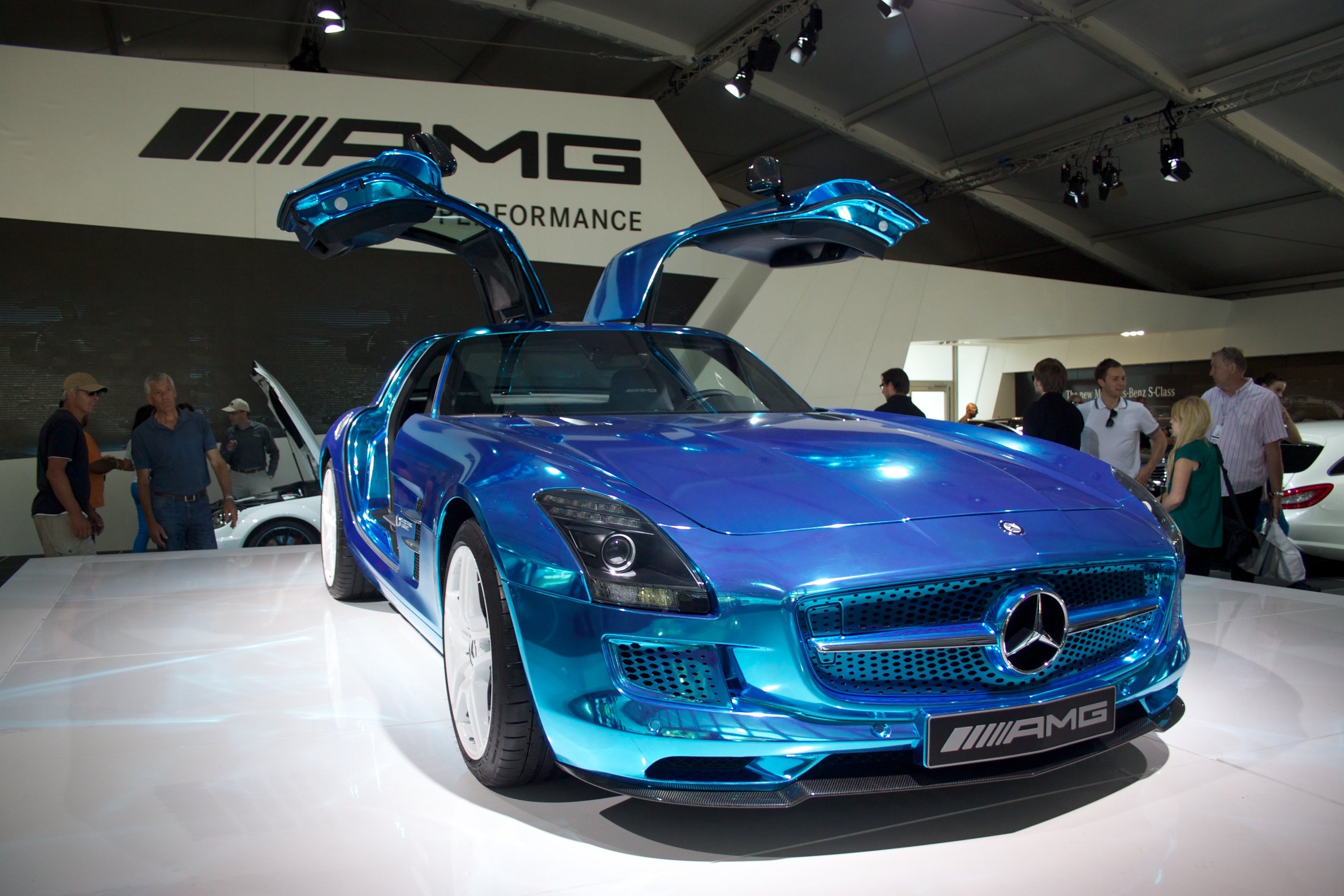 The SLS Electric was developed by AMG and the Merc F1 team. It used a motor at each wheel giving it total 4 wheel drive delivering a total of 730 bhp and 738 lb ft of torque. That’s a lot of power.

Car magazine gave it a drive and a review:

Lift the vertical-opening gullwing door, vault the wide sill and there’s little to suggest the ZE power source or the pushrod dampers up front required, as the existing double wishbone set-up left no room for front driveshafts. The cockpit is fairly cramped, but the driving position near-perfect, that long nose stretching far into the distance and the unfashionably vertical A-pillars creating a view unlike most other supercars. Instead of a rev counter, there’s a power gauge with a strip of green lights between it and the speedo to tell you how much engine braking effect you’ve selected, which you do by tapping the now redundant shift paddles on the back of the wheel.

Being able to apply strong retardation simply by lifting the throttle is brilliant, intuitive fun, effectively making the SLS a one-pedal vehicle. What a shame the full braking effect isn’t available when the battery’s full as there’s nowhere for the charge to go. Never mind, a couple of drag-strip starts should make a bit of room…

What’s the SLS Electric Drive like on the move?

Punch the throttle from a stop and the E-SLS feels supercar quick, but nothing more. All the torque vectoring in the world can’t disguise that this thing weighs 548kg more than the standard car, with zero to 62mph in 3.9sec, a tenth slower than in a standard V8-powered SLS.

But from there upwards, a slightly giddy feeling in your gut tells you there’s more to the story. A giddy feeling that develops into full-blown nausea. It’s that same sensation you get when pinning the right pedal in a Bugatti Veyron, that same dizzying unsureness: I think I’m enjoying myself, but I also think I might chunder. And with no gearshifts to interrupt proceedings, that push is utterly relentless.

There’s no waiting for the engine to climb onto its power wave before surfing the thing on to redline. Whatever the speed or situation, ask for more power and it is delivered instantly. While cars like the Tesla Roadster, and even the Leaf, feel rapid at legal speeds, the push in the back tails off before you’re satisfied. Not so the SLS, which keeps pulling and pulling, well into three figures.

What about the handling?

But the scale of the performance on offer is actually far less exciting than the way it is deployed. We’ve yet to drive a car that delivers such a perfect illustration of what real torque vectoring can achieve than this battery-powered SLS. Because each of the four wheels is driven by its own motor, torque can be apportion from 0-100% at each corner by the computer.

Comfort Mode, programmed for safe understeer and a reluctance to change direction that makes a Tory Euro-sceptic look open-minded, is so dull you’d have more fun in a long wheelbase S-class diesel. Switch through Sport Mode, to Sport Plus, and it feels like someone’s moved the ‘engine’ back six feet in the chassis. The turn-in, the poise, are almost incomprehensible given that gargantuan kerb weight. Steering happens with feet, not hands, yet that agility is backed up by real stability.

On the downside, the now electro-hydraulic steering lacks feel compared to the SLS Black we drove on the same day, and the driving beyond the tyres’ grip limits can feel snatchy until you learn to let the four-wheel drive system tidy up those slides for you.

AMG has invested much time to create a unique sound for the E-SLS. The car I drove didn’t have the sound effects, so I had listen to some sound files on an iPad instead. They’re a Tron-like take on a regular car noise, and rather lacking in character.

The Electric Drive is a fascinating piece of machinery, but at £350,000, would you pay twice the price of a regular SLS for one – and still have the usual battery-car foibles to deal with? Merc claims a 155-mile range, with a recharge taking from three to 20 hours.

Be in no doubt that this SLS is a genuinely exciting machine, but it still feels slightly sterile besides the petrol-engined alternative. So it comes down to having a car that no one else has.

There’s a bigger picture, here, though; the lessons from this car will filter down to real-world affordable Mercs. A torque-vectoring electric C-class that handles like a Lotus Elise? That sounds like money well spent.

VW Audi at it again – Shock