The UK is one of the last major markets to get the Tesla. I guess it’s because it must be a pain and an engineering cost to switch the car to Right Hand Drive. The UK is a large car market and currently the only European market showing any signs of life.

The company is now starting to show the Model S. This weekend Tesla held its first public event to drive the Model S on the UK roads. It was an invitation only affair with pre-booked driving slots held at a hotel near Windsor, close to the Tesla UK office.

They had 5 Model S cars to drive. All left hand drive and from various part of Europe. In the hotel room was a rolling chassis and a white car together with a couple of iMacs where you could browse the Tesla site and place an order. Groups were allocated a two-hour slot to play with the car, speak to the Tesla folk and take a test drive around a set course with an on-board Tesla Co-Pilot. The course was only about 10 miles on length and covered mostly small UK roads with one short stretch on dual carriageway.  But before we headed to the road we were subjected to pretty lame presentation about the company and plans. This was a great opportunity to present the company and products. However it was rather dull and poorly presented. An opportunity missed.

The car in the hotel room was definitely the center of attention as people climbed in and out of it. The main comments seemed to be about the size and space. The car is large when compared to most UK cars on the road. The interior space is massive, especially the rear seats that feel very comfortable and airy. This is backed up the front and rear trunks or as the Brits say bonnet and boot. The brochure claims a storage space of 150 in the front and 1640 in the rear that totals over three times the storage of a BMW 5 Series.

The mega control screen was the other key point of interaction. You can do anything with it. All the basics like Sat Nav, radio, climate but also drag the roof open, set the driver’s seat position into memory with a name. The displays for the power usage and range calculations were especially neat and informative. Unlike most hybrids with their graphics showing energy into and out of the pack, the Tessa just showed power used over the last 5, 15 or 30 miles and calculates the expected remaining range based on the most recent driving data. 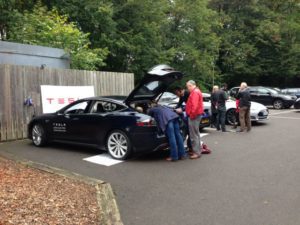 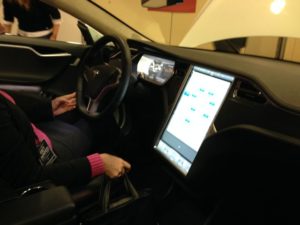 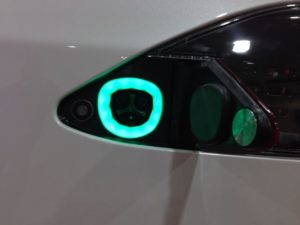 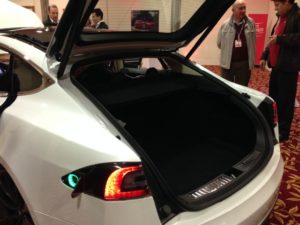 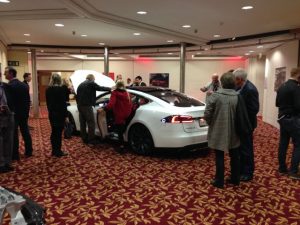 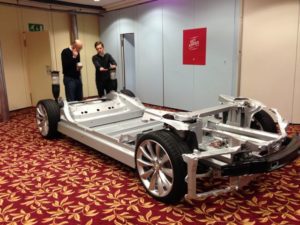 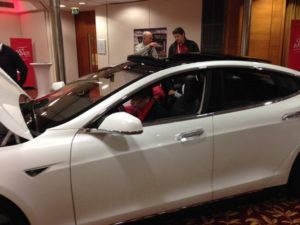 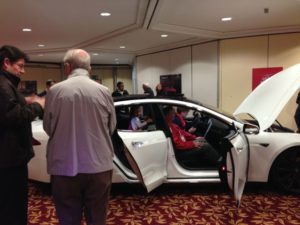 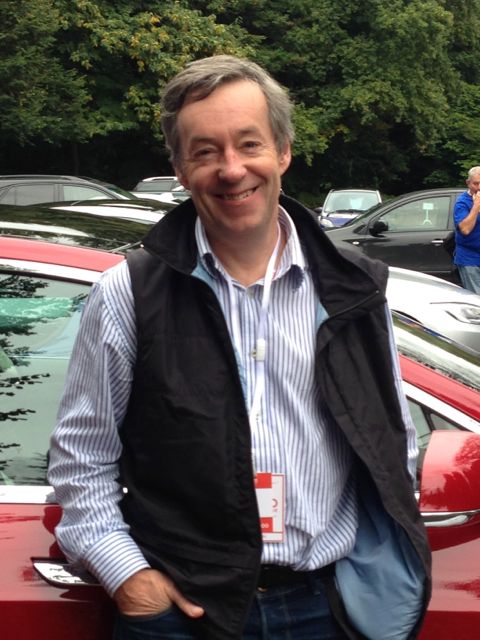 The car drives superbly the ride being especially impressive. Our red car had 21’ wheels fitted with low profile tires. I think the co-pilot said that it was the sportiest of the options.  The performance was astonishing, the car just powered away with total ease. We reached no more than 70 MPH and only then for a dozen or so seconds but it reached that speed in a mighty short time. We drove to the event in my Porsche 911 and the Tesla’s performance was far more dramatic than the Porsche. The other big difference was the lack of noise. The car is super quiet and this makes it a relaxing vehicle to drive and be driven in.

Tesla are now taking orders for UK cars. However the price and specs are not fixed yet. So you can place a £4,000 deposit now and in a few months, most likely early 2014, be told the UK price. Your deposit is fully refundable.  At that point you will be able to configure your car and have a good idea of when it will arrive.

People that I spoke with seemed impressed with the car. Not knowing the final price will put some people off from pulling the trigger but we have a pretty good idea of the comparisons from other European countries. One Tesla rep mentioned that they registered 650 Model S in Norway in September and this represented the largest of any model, even the best-selling VW Golf.

With petrol and diesel pushing £1.32 per litre, remember that’s equivalent to just under £6.00 per gallon we pay a small fortune for fuel. With a UK average of 10,000 miles per car and say 40 MPG that’s equal to 250 gallons or 1,136 litre of petrol. At today’s price that’s £1,500 just on petrol before you include the road tax and other costs.

Of course the big cost in motoring is the depreciation of the car and the finance of the purchase. The running costs are important of course as they have to be met every month.

Even the 60 KWh offers impressive performance.

Let’s compare with a BMW 5