by Alastair on December 5, 2016 in EV News, Sales and marketing

An interesting report published in Bloomberg claims that big bad GM may lose as much as $9,000 on every all electric Bolt that leaves the showroom. Sounds crazy until you understand more about the Clean Air Rules in California.
California crafted the doctrine, with tough clean-air rules and a mandate that automakers sell some non-polluting vehicles if they want to do business in the Golden State. Nine others have adopted it, New York and New Jersey among them, and all told they make up close to 30 percent of the U.S. market. That goes a long way to explaining why zero-emissions models from more than 10 brands are on the roads, with more on the way. Most are destined to be loaded with red ink for their makers, but they’ll be great deals for consumers as companies unload them to meet their targets.
While Trump may dilute federal programs that take aim at carbon-dioxide spewing cars, California won’t be backing down, certainly not during Governor Jerry Brown’s term. The most populous state is such a powerhouse — roughly 1 in 8 new vehicles in the US was registered there in the first half of the year — that companies will keep spitting out electrics for the privilege of selling everything else in their lineups.

“California will continue to act as the ballast, as the center of gravity, for clean air and climate policies in the U.S.,” said Levi Tillemann, author of “The Great Race,” a book on the future of automobile technology. “Trump will thrust the state back into the role of clean-air crusader, and that’s a banner a lot of people in California don’t mind carrying.’’

Where it’ll get interesting is over the next decade or so. The states’ rules are set to tighten so that zero-emission vehicles, or ZEVs, will have to rise to an estimated 15.4 percent of sales by 2025, some five times the current level.
The hurdles may go higher: Brown, a Democrat with two years left in his term, signed a law ordering greenhouse-gas emissions be 40 percent below 1990 levels by 2030. To get there, ZEVs, plug-in hybrids or fuel-cell cars like Honda Motor Co.’s Clarity may have to comprise 40 percent of sales, up from about 3 percent now, according to California Air Resources Board staff projections.
Can that really happen? “The idea that automakers will sell 40 percent of their vehicles at a loss in California is ludicrous,” said Eric Noble, president of the CarLab, a consulting company in Orange, California, who reckons most electric cars lose at least $10,000 per sale.
The industry’s willing to take the hit on a small scale now. Fiat Chrysler Automobiles NV’s battery-powered Fiat 500e is made for California alone, and Chief Executive Officer Sergio Marchionne said in 2014 that it was losing $14,000 per sale. The company’s pretty much giving it away, at a monthly lease-rate of as little as $69. Nissan Motor Co. has advertised lease deals for the Leaf at as low as $149.
Of course, the industry might figure out how to make ZEVs into money makers, once the charging-station infrastructure is built out and as battery costs fall. Global demand seems sure to rise, with major economies, including China, having recognized climate change as a threat and tailpipe-emissions from gas-powered autos as a chief contributor.
The U.S. has a ZEV incentive of its own, offering a $7,500 tax credit to buyers, and also gives credits to manufacturers to reward them for cars that meet greenhouse-gas reduction targets set by the Obama administration.
There’s no indication President-elect Donald Trump has a view on these enticements. While he has dismissed global warming as “nonsense,” he told the New York Times he has an “open mind” on scientists’ overwhelming consensus that human activity is warming the planet. Key members of his transition team have rejected that notion or contend the dangers are exaggerated.

The Alliance of Automobile Manufacturers, the industry’s main trade group, has asked Trump to consider their state ZEV costs when evaluating the feasibility of rules set under President Barack Obama to boost average fuel economy standards by 2025. Over the next eight years, the electric-vehicle demands will impose costs of up to $40 billion on companies that they’ll pass on to customers, according to the group. The miles-per-gallon standard, which is 35.3 for 2016, will under the rules go to 50.8 — a number the industry contends could make cars prohibitively expensive.
On Wednesday, the U.S. Environmental Protection Agency took a formal step that makes it harder for Trump to undo the Obama targets. EPA Administrator Gina McCarthy announced a preliminary determination that Obama’s 2025 targets are achievable, affordable and appropriate. If she finalizes this decision before leaving office, she’ll force Trump into a formal and protracted rule-making process to revise the rules.
Whatever happens in the national capital, California, a largely left-leaning state, will be where the power is for years to come. The bill that established its greenhouse-gas targets was championed by then-Governor Arnold Schwarzenegger, a Republican. Two California cities, Los Angeles and Bakersfield, are the most smog- and particulate-laden in the U.S. Brown has called climate change “the existential threat of our time.”
And California is where ZEVs are being dumped. More than half of all electrics were sold there in the first six months of 2016, according to IHS Markit Ltd.

Under the rules, GM needs to sell enough Bolts that it can go to town on other vehicles, including pickups and SUVS, which is where the big money is. The Bolt’s anticipated per-sale loss of roughly $8,000 to $9,000 is an estimate based on a sticker price of $37,500, according to a person familiar with the matter. A GM spokesman declined to comment on the expected profitability.
But GM has reasons beyond compliance to promote the Bolt, according to Tim Mahoney, Chevy’s chief marketing officer. For one thing, it lures younger, technologically savvy buyers who probably wouldn’t have considered Chevrolet, he said. “It’s a statement about what we can do for the Chevy brand.”
The Bolt has a 238-mile range, which gives it an edge over mass-market electrics that have been around for a while; the Leaf can go 107 miles on a single charge, the Fiat 500e just 85. GM will also have a jump on Tesla Motors Inc.’s first and hotly anticipated mass-market offering, the Model 3, due late next year. The Bolt will be available in California and Oregon this month, with states added through 2017. GM also plans to sell the Bolt in China and Europe but not the UK.

Here’s how the math works for GM in California. Let’s say it sells a total of 219,962 vehicles in one model year (as it did, in fact, in 2015). To avoid heavy fines or the threat of getting shut out entirely, it would need state-awarded ZEV credits equal to 14 percent of the total — or 30,794. That would mean finding buyers for 7,698 Bolts, earning four credits for each, or 10,082 Chevy Volt plug-in hybrids or a combination of the two. 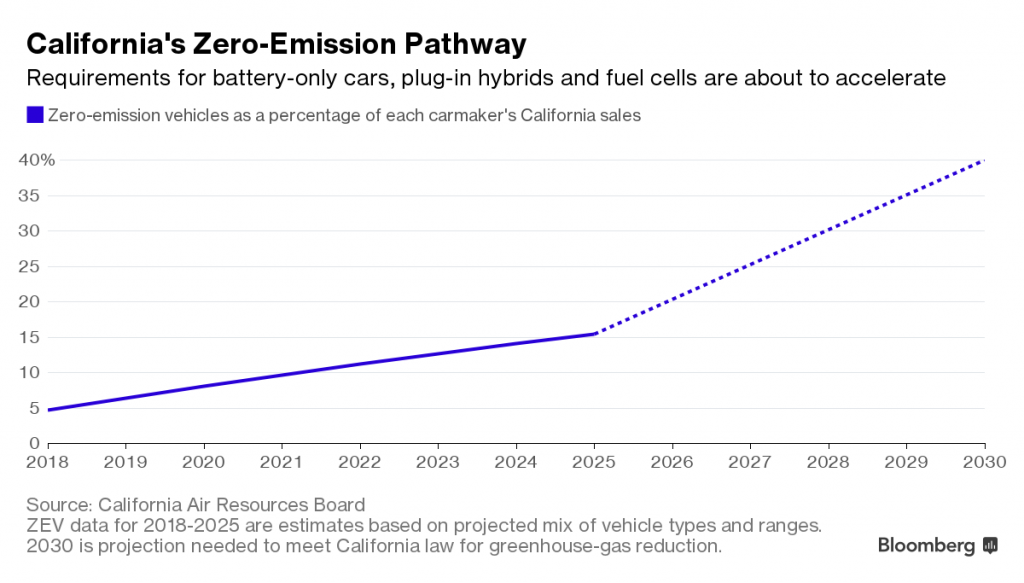 “EVs are compliance vehicles and GM knows this,” said the CarLab’s Noble. “The Bolt will take sales from all of the other vehicles on the market, and GM will get a lot of credits.”

The more ZEVs a company peddles to the public, the more credits it earns, and those with a surplus can sell them to competitors that are falling behind. As an electric-only manufacturer, Tesla has been able to really tap the program. In the third quarter, it made $139 million selling credits, which helped Tesla hit its second-ever quarterly profit on a GAAP basis. The biggest buyer in the 11 months ending in August was Fiat Chrysler; GM purchased the smallest amount.

Tesla CEO Elon Musk has called California’s ZEV bar “pathetically low,” saying on an earnings call in August that “there’s massive lobbying by the big-car companies to prevent CARB from increasing the ZEV credit mandate, which they absolutely damn well should.”
Some see the future in zero- and low-emissions, with or without incentives. Toyota Motor Corp. has said it will stop making virtually all gasoline-burning models by 2050, and Volkswagen AG has laid out plans to be selling 1 million battery-powered cars annually by 2025.
The U.S. is one-fifth of the global car market, and groups ready to go to battle over emissions like to offer an argument beyond the threats of smog and global warming. California’s policies are forcing companies to be innovative, said Luke Tonachel, a senior analyst for the Natural Resources Defense Council. If they stop, “U.S. manufacturers could lose market share.”