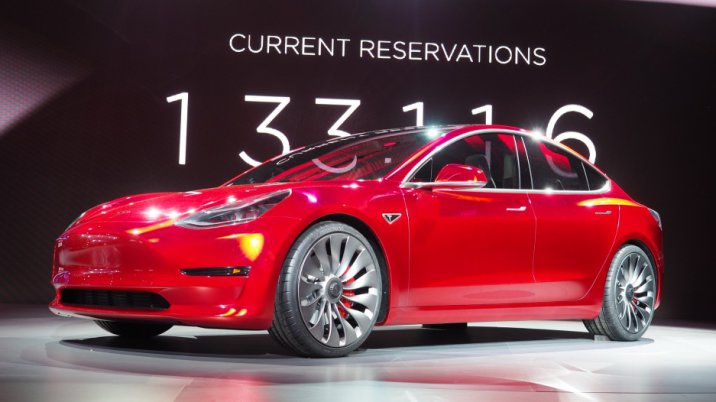 The wait is over, or at least the Model 3 launch is here. Yesterday at the company’s design studio in Hawthorne, California, Tesla showed the world the car that they have wanted to build since day one. CEO Elon Musk said the car will deliver at least 215 miles of range beginning at just $35,000 — that’s a bold claim, and an important one for Tesla to meet. Musk is “fairly confident” that deliveries will begin by the end of 2017, and “you will not be able to buy a better car for $35,000, even with no options.” And it will be one of the safest cars in the world, according to Musk. Elon described the Model 3 as the next step in the three part process. Step 1 was the roadster to prove that Electric cars are not dull. Step 2 sell low volume expensive cars, that’s the S and X and Step 3: High volume, lower cost thats the Model 3.

What can we expect and when.

The company shared few base facts other then zero to 60 in 6 seconds or less. Not as fast as a P95D but pretty respectable and up there with a fast BMW 3 or Audi A4.

The base car will do 0-60 mph in less than 6 seconds, with versions that go “much faster.” Range will be at least 215 miles, but Tesla hopes to exceed those numbers in the final car. All Model 3 cars will include support for Tesla’s high-speed Supercharging network, because “it’s about going where you want to go,” according to Musk. By the end of 2017, when the Model 3 launches, Tesla says it will have a total of 7,200 Superchargers, double the number available today.

Like the Model S, the Model 3 will come in both rear-wheel drive and all-wheel drive versions, and there’s a 15-inch landscape touchscreen inside — a change from the 17-inch portrait touchscreen in the Model S and X. Autopilot hardware is standard, and all safety features will be active automatically. Five adults will fit comfortably — “comfortably is the important part here,” says Musk.

Range will be in excess of 215 miles, or over twice the current Nissan LEAF. Plus all Model 3 will have access to the Tesla Supercharger network of fast charging stations.

The Model S and Model X, are both expensive cars. Even with tax incentives, both cars easily push $100,000. In order for Tesla to sell ten times as many cars as it does now, it needs a much cheaper automobile. That’s the Model 3. It’s the future of the company.

The front to rear roof area — from the windshield all the way to the boot — will be one continuous piece of glass. And, just like the Model S, it will have front and rear trunks for storage. “More cargo capacity than any gasoline car of the same external dimensions,” says Musk. You can even fit a 7-foot long surfboard on the inside.

But don’t expect to get your hands on one any time soon. The Model 3 isn’t expected to begin production until late 2017, more than 18 months from now. Tesla will happily take your preorder for a modest £1,000 down payment. Tesla plans to more than double the size of its dealership and service network by the end of next year, to sell and take care of all these new cars.

Elon announced that Tesla had received over 120,00 orders before the start of the presentation. At the end a scrolling screen shows that had grown to over 130,000.

The Model 3 will go head-to-head with the established big sellers in the compact executive car class the release date is set for the end of 2017 with a starting price  of $35,000 (£24,400) in the US. It will count cars like BMW’s 3 Series, Audi’s A4 and the Mercedes C-Class as rivals but that low price for a fully electric car will set alarm bells ringing at the German firms and across the industry. The Model 3 is likely to be closer to £35k by the time it arrives in the UK but with the plug-in car grant factored in, it will still be very competitively priced.

But today is all about the Model 3, the pinnacle of the Tesla Motors master plan. Elon Musk laid it all out in a blog post ten years ago:

Build sports car – The Tesla Roadster
Use that money to build an affordable car – The Model S
Use that money to build an even more affordable car – The Model 3
At the announcement of the Model 3 this evening, Elon Musk even thanked Model S and Model X purchasers for funding the development of the car. The Model 3 is the culmination of a decade’s worth of work. Elon Musk is betting billions on it, and it needs to deliver. The future of Tesla Motors, quite literally, rides on its success.

Tesla Model 3 production and the Gigafactory

While Musk says Tesla’s existing plant in Fremont, California, is capable of building 500,000 cars per year (in its past life as a joint GM-Toyota plant, it produced around 350k per year), and that is Musk’s goal. The issue is that every electric car needs a battery, and in order to build a half-million electric cars per year, Musk says Tesla would have to absorb the entire world’s current lithium-ion battery production.

That is the job of Tesla’s new Gigafactory, currently under construction (and already producing parts) in the Nevada desert. Once up to speed, Musk claims the factory will produce 50 gigawatt-hours of batteries—“More lithium ion batteries than all the other factories in the world combined.”

With the assembled crowd cheering nearly every sentence Musk uttered, one got the sense that the details of the Model 3 are largely unimportant. Not unlike Apple, buyers believe in Tesla and they are ready to purchase whatever the company deigns fit to sell them. Hours before the announcement, would-be buyers lined up at Tesla dealerships to put down a $1,000 or in the UK a £1,000 refundable deposit in order to secure their order.

As the car was revealed, Musk announced that they had already taken 115,000 orders. Online reservations opened as Musk took the stage, and less than two hours after he left, the number was closing in on 135,000.

Few cars have been met with more anticipation than the Tesla Model 3. For the unveiling, Tesla invited a crowd of Tesla owners and potential Model  3 buyers, along with members of the press, to the SpaceX headquarters in Los Angeles, California. Founder and CEO Elon Musk took the stage before the eager crowd not only to reveal the new low-priced, mass-market electric car, but to talk about how Tesla got to this point.