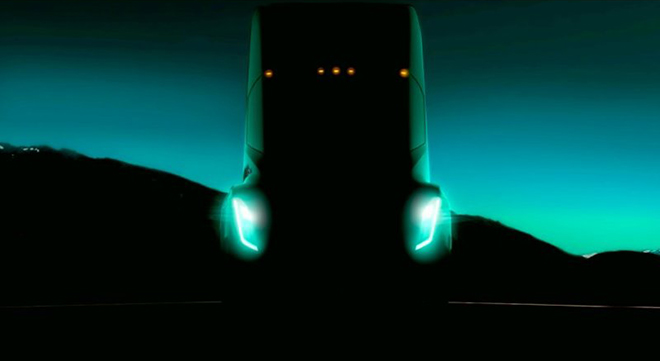 Trucking is big business. UPS , DHL and FexEx are all playing with electric trucks, as are Mercedes and Cummings. Whilst current volumes are small the rate of growth is expected to ramp up significantly.

UPS, the king of commercial fleets, has been testing electric trucks for several years. Workhorse, one of several companies supplying e-trucks to Big Brown, has seen each successive order grow bigger, from 2 units to 18 to 125 to an order for 200 announced in October 2016.

When DHL decided in 2013 that it wanted to upgrade its fleet to electric powertrains, it couldn’t find a suitable vehicle or an OEM willing to develop one. So, in cooperation with a university spin-out called StreetScooter, it developed its own EV. By the end of 2017, over 4,000 will be in service.

With Tesla set to announce an EV semi on October 26th the race for Electric Trucks is underway. The question is no longer whether trucks will electrify, but when.

A new article from McKinsey Energy Insights reports that the electrification of the freight sector is moving faster than expected. In “What’s sparking electric vehicle adoption in the truck industry?” the authors predict that e-trucks could account for 15% of global truck sales by 2030, and as much as 25-35% in favorable segments such as urban light-duty trucks in China and Europe.

According to McKinsey, three main factors will drive the adoption of e-trucks: cost parity with diesel alternatives; readiness for electrification, which includes the availability of models on the market and supporting infrastructure; and local and national regulations.

The authors examined 27 segments of the truck market, and concluded that the majority of commercial vehicles can reach cost parity with legacy diesel trucks within the next 10 years, assuming that battery cost and power density continue to improve. The most cost-effective application is likely to be light-duty trucks that drive between 100 and 200 kilometers per day. This segment is expected to reach cost parity by 2021 – in fact, in some markets parity has already been reached.

Even once cost parity is attained, a large-scale switch to e-trucks will require a sufficient number of models on the market and adequate charging infrastructure. McKinsey sees the supply of e-trucks as a likely bottleneck for the next few years. When it comes to charging infrastructure, early adopters will mainly charge their fleets overnight at their own depots. However, once e-trucks become more mainstream, supercharging infrastructure is expected to be rolled out at distribution centers and along major highways.

Regulation could further speed the proliferation of e-trucks. Governments are tightening emissions targets for carbon dioxide and nitrogen oxides. There are already over 200 cities with emission and access regulation zones, and major cities including Madrid, Paris and Mexico City are announcing diesel bans.

The adoption of e-trucks could have a significant impact on energy markets. Trucks represent only around 5% of the global vehicle stock, but they make up more than 20% of fuel demand, due to their high fuel consumption and mileage. Trucks account for a third of global diesel demand.

However, it may take some time for the impact of electrification to be felt, because the majority of diesel is consumed in the heavy truck segment, which is expected to be the last to electrify.