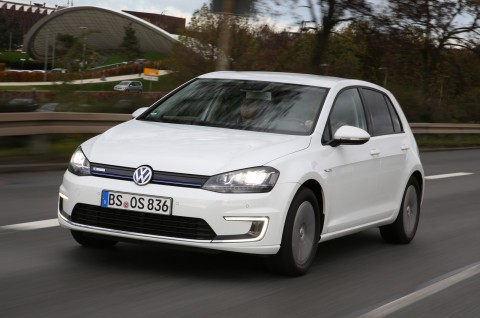 Following hot on the heels of the e-Up, the new zero-emission version of Europe’s perennial best seller is planned to go on sale in the UK this spring at a price, Volkswagen’s head of R&D Hans-Jakob Neusser suggests, will see it undercut the recently introduced BMW i3.

Volkswagen has taken its time developing the e-Golf, resisting the urge to launch it until its advanced driveline was sufficiently mature — both in terms of performance and range — to fully meet customer expectations.

Now, with increasing political pressure at home to get zero-emission cars on the road and a rising public awareness of the ability of the latest generation of electric cars, the German car maker appears confident of its potential to finally place the e-Golf on sale.

Unlike BMW with the carbonfibre-intensive i3 – and Nissan with the Leaf as well as Renault with the Zoe for that matter, Volkswagen has decided to base its new electric car around an existing model, the seventh-generation Golf; the reasoning being that a number of internal studies carried out in recent years have revealed potential electric car buyers are more interested in overall everyday practicality and ease of use than fancy styling and a sense of standing out from the crowd.

It is a typically conservative approach, but one that Volkswagen is confident will prove the right one over the longer term. Apart from a blue strip adorning its grille, a pair of e-Golf badges front and rear and full LED headlamps, there initially appears to be little else to differentiate the new e-Golf. However, a closer inspection reveals it boasts a number of detailed aerodynamic refinements that help it to slip through the air with greater efficiency than its more conventional combustion-engine touting siblings.

Included is a new front bumper with integrated LED daytime running lamps that mimic the shape of those of the e-Up, a closed-off grille to block the entry of air to the engine bay, additional underbody panelling for smoother air flow at speed, a rear spoiler atop the tailgate, so-called air guides within the C-pillars and a new rear bumper. The wheels have also been optimised with an aerodynamic design that is claimed to reduce turbulence within the wheel houses. The result is a claimed 10 per cent improvement in drag coefficient over the standard Golf at a claimed Cd of 0.28.

To help streamline assembly at its Wolfsburg-based manufacturing base and keep production costs in check, the e-Golf uses the same MQB platform structure and high strength steel body structure as other seventh-generation Golfs. One body style, a five door hatchback, is planned to underpin sales, although VW doesn’t rule out adding a three-door hatchback at a later stage, should demand warrant it.

Mounted transversely up front in the space usually occupied by the Golf’s wide variety of petrol and diesel powerplants is an in-house developed, engineered and produced synchronous electric motor. Tuned to operate at a maximum 12,000rpm, it develops 114bhp and 200lb ft of torque in the most liberal of three driving modes. Drive is channelled to the front wheels through an in-house produced single-speed gearbox, known as the EQ270.

Energy for the electric motor is provided by a 24.2kWh lithium ion battery that weighs 318kg and is mounted underneath the boot at the rear. Consisting of 264 individual cells sourced from Panasonic, it generates a nominal 232 volts. Charging time is put at a lengthy 13 hours on a 240 volt household socket at a charging power of 2.3 kW. However, this can be cut to just four hours with an optional combined charging system that allows the e-Golf to plug in at a charging station boasting power levels of up to 40kW.

There are no compromises in interior space or overall accommodation, although the boot loses its double-floor feature, meaning there is slightly less luggage space than with other seventh-generation Golfs.

As with the exterior, the interior boasts a familiar look apart from the instrumentation, which has been altered to in line with the driveline. The e-Golf also receives an eight-inch touchscreen colour monitor as standard, providing the basis for a range of unique on-board functions, including a so-called range monitor, energy flow indicator and charge manager.

Much of the e-Golf’s appeal lies in its familiarity, which is something Volkswagen is clearly banking on in its quest to become a force in the electric car ranks.  As with the e-Up, it is entirely conventional to drive. This ease of use should make it an attractive proposition, not only for private buyers but also fleet operators and rental car agencies.

The e-Golf starts with a simple crank of a key in the ignition, at which its instruments spring to life to indicate the electric motor is primed. You then press a button to disengage the electronic handbrake and select d (for drive) via the gear lever – just as you do in conventional Golf models fitted with an optional dual-shift gearbox.  The weighting of the throttle is heavier than usual, but it is easy to modulate on the run.

Save for some roar from the tyres, progress is silent at city speeds. There is sufficient power on tap and nimbleness within the chassis to make the e-Golf fun in an urban environment. The steering is also pleasantly direct, albeit largely devoid of any meaningful feedback.

While it has focused on making the e-Golf easy to operate, Volkswagen has not shied away from providing it with variety of standard energy boosting functions that help the driver to extend its range.

By sliding the gear lever in to B (for brake energy recuperation), you can alter the amount of kinetic energy collected during braking and subsequently stowed in the battery for latter use – and with that comes an altering in the rate of deceleration on a lifted throttle.

There are four defined steps of energy recuperation – D1, D2, D3, D4 – engaged either via the gearlever or steering wheel-mounted paddles; the least severe of which sees the e-Golf gently slow as you back off the throttle and the most severe of which is equivalent to a prolonged nudge of the brake pedal.

There are also three different driving modes – Normal, Eco and Eco Plus – engaged via the touch-screen monitor. They progressively reduce the amount of power produced by the electric motor, allowing the driver to choose between the maximum 114bhp, 94bhp or 74bhp.

Performance wise, there’s little to complain about. With 199lb ft of torque available the moment you nudge the throttle in normal mode, the e-Golf bursts off the line with a strong and seamless surge of acceleration, hitting 37mph in 4.2sec – a time Volkswagen suggests is quicker than the Golf GTI to provide it with a likeable, spritely nature in an urban driving environment.

The 0-62mph time is a little less notable at 10.4sec, owing in part to the fixed gearing and effect of its 1510kg kerb weight, which makes it 230kg heavier than the Golf 2.0 TDI. However, the all-electric Golf is anything but slow, possessing plenty of urge on the run. Top speed varies depending on the driving mode, limited to 87mph in normal, 71mph in Eco and 56 mph in Eco Plus.

The inherent qualities of the electric driveline make for quiet and relaxed progress.  However, the added weight and 205/55 R16 profile low-rolling resistance with stiff side-wall structures have taken the edge off the ride, which is noticeably firmer than other Golf models.

The e-Golf’s claimed average consumption of 12.7kWh/100km is quite impressive, providing it with an official range of 118 miles. With variances in route profile and driving style taken into account, Volkswagen suggests the real world range is between 81 and 118 miles.

Are we at peak ICE?