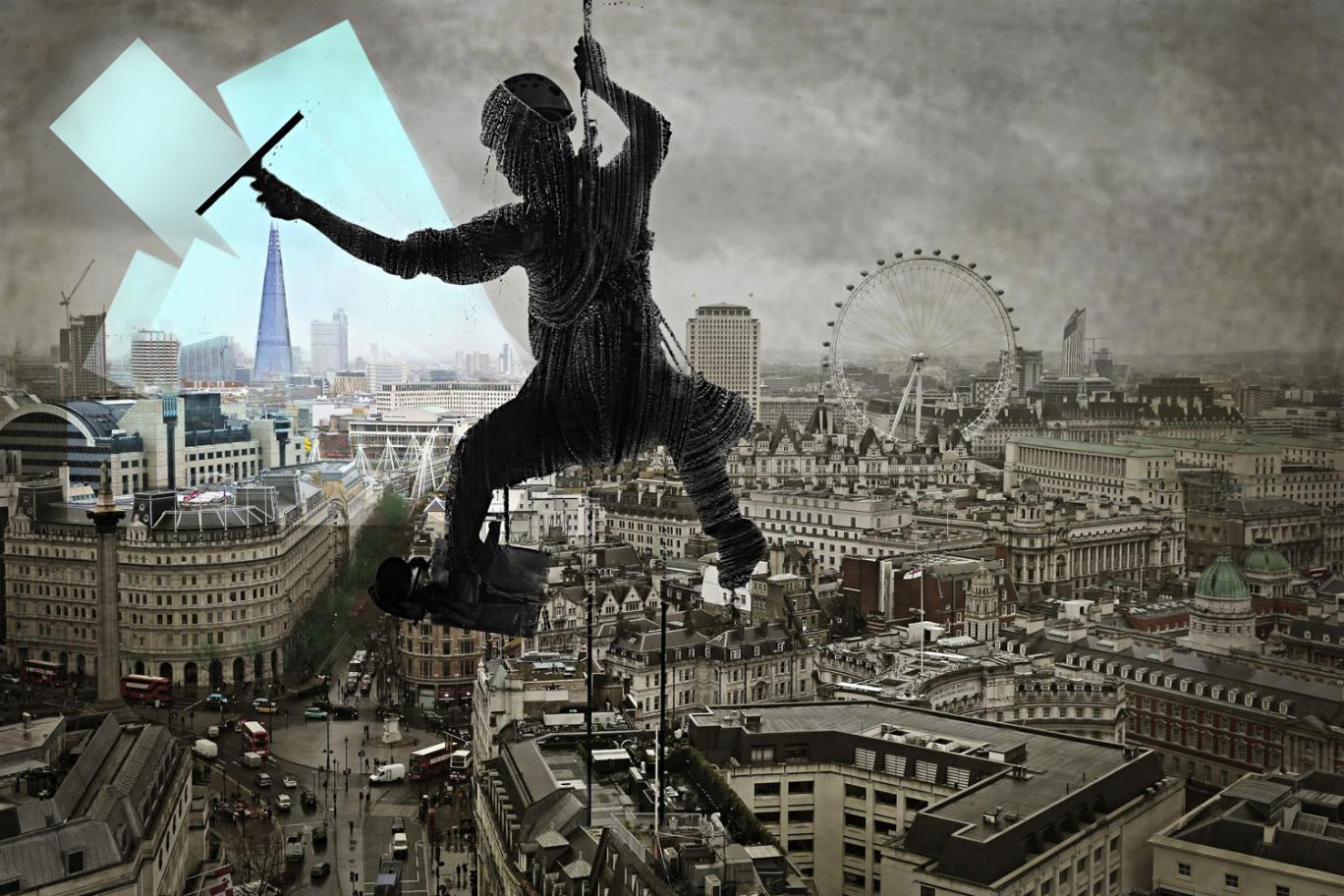 London needed only seven days to exceed EC pollution limits for all of 2016. By the end of the week, levels of NO2 (Nitrogen dioxide)  had already exceeded the limit of 200 milligrams per cubic meter more than 18 times in Putney High Street since, as much as EU regulations will allow for an entire 12 months. Damning a whole city for a single site’s breach might seem extreme, but the pollution spike was most likely repeated elsewhere, too.

Oxford Street, London’s main shopping street, is notorious for having the highest recorded levels of NO2 anywhere in the world. It has probably exceeded its annual limit already as well—in 2015 this took just four days—but measuring equipment has malfunctioned, so this year at least it’s been spared a headline. In fact, 181 square miles of Greater London currently exceeds yearly NO2 limits according to a Policy Exchange new report, leaving London at an NO2 pollution level similar to that of Beijing or Shanghai. These huge overages might come as a shock for a city that has shown some leadership in pioneering congestion charging, adopting bikeshare fairly early, and in fact adopting strict air quality controls as early as the 1950s. What on earth is going on?

The recent Policy Exchange report has answers—some predictable, some unexpected. First off, it’s fair to note that London has made headway in cutting some emissions. The city’s particulate matter pollution has dropped below EU safe levels, and sulfur dioxide levels have plummeted. With NO2, however, there’s been little or no progress. Culprit No. 1 is the huge uptick in the number of diesel-fuelled vehicles on UK roads. As the report notes, in 1994 they made up just seven percent of the entire UK fleet. Today, they represent 36 percent of that fleet. See chart below. 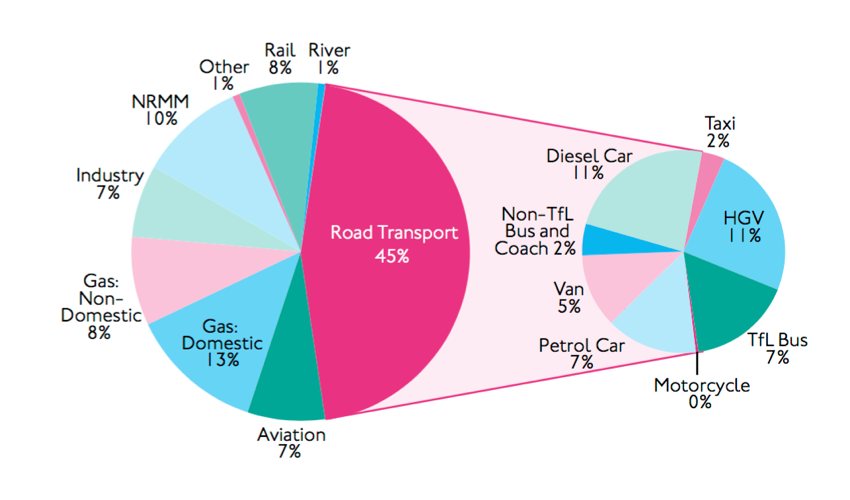 Breakdown of NOx Emissions in Greater London in 2010, by Source

Ironically, environmental concerns have in part caused this spike. Included in a lower car-tax band, diesel vehicles have been favored by the UK government due to their lower CO2 emissions and greater fuel efficiency. This favoritism unfortunately overlooked their considerably higher NO2 and PM emissions. Diesel cars have also lagged behind gas-run cars in emission improvements and, the report states, performed worse on the roads than they have in tests: 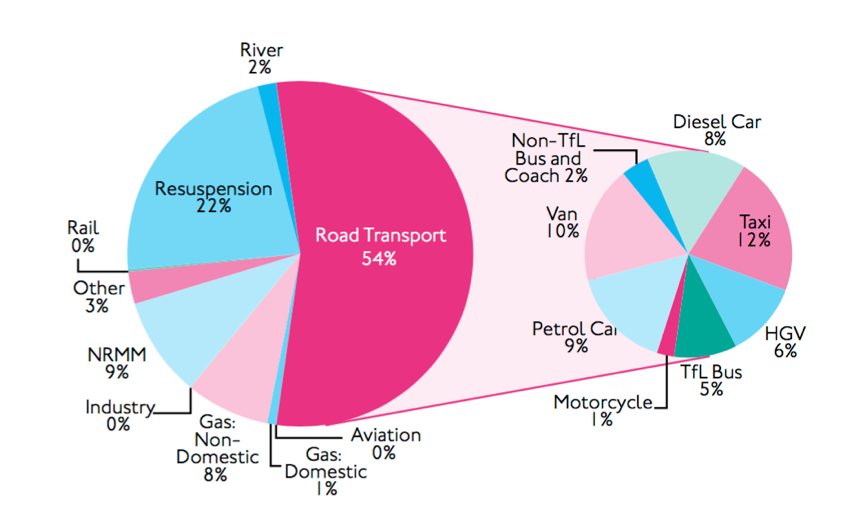 Breakdown of PM Emissions in Central London in 2010, by Source

The pollution such vehicles create can be clearly linked to London’s high NO2 levels, 45 percent of which come from vehicles. Gas combustion (separated into domestic and non-domestic categories), non-road mobile machinery, industry, rail, and aviation also play a role, but none of these sectors’ pollution portions exceed 13 percent of the total. If London is going to clean up its air, it’s going to have to push for a root-and-branch low-emissions overhaul of its vehicle fleet.

London has a plan to do just that, at least in its most polluted sections, and albeit quite far into the future. In September 2020, London’s congestion-charge zone will also become an Ultra Low Emissions Zone where high-emissions vehicles will have to pay a charge to enter. The scheme is expected to cut central London’s NOx (the combined term for the pollutants nitric oxide and nitrogen dioxide) and PM levels by half. If London’s current pollution problem seems bleak, its pall should lighten considerably in the future.

Within this proposed zone, however, the pollution picture is a little more complex than in the city as a whole. At 48 percent of the total, NO2 emissions from vehicles here are even higher than elsewhere, but there’s also another major player in the pollution problem: Non-domestic gas combustion now contributes a hardly inconsiderable 33 percent of Central London’s NO2 emissions.

This is a pollution source that is only likely to grow—Policy Exchange estimates that it will create 48 percent of Central London’s NOx pollution by 2025. This is because the frequency of localized gas burning is likely to grow. Currently the UK is promoting decentralized power generation, including combined heat and power plants, as a more efficient way of delivery energy. This is essentially a good thing, but when it comes to emissions it seems that not all forms of decentralized generation are equal. The Greater London Authority’s rules, for example, still allow emissions of up to 300mg per kilowatt hour for gas CHP turbines, a considerably higher level than those typical of current heat only condensing boilers.

If gas CHP is rolled out across London in the future without stricter controls on their emissions, they could gobble up much of the reduction gained from better vehicle emission control. If there’s something to be learned from the UK’s past promotion of diesel, it’s that if you don’t look at all sides of a potential environmental improvement, you risk shooting yourself in the foot.