The Bolt or Ampera-is a five-door, five-seat hatchback, that GM pitch as an affordable rival to the leading EV in Europe: Nissan Leaf, the Audi A3 e-tron, BMW i3, Volkswagen e-Golf and second-generation Ford Focus Electric.
Opel says the launch of the Ampera-E is part of its ongoing model offensive which will result in the launch of 29 new vehicles between now and the end of the decade.
Opel says the new car builds “on the electrification expertise established with the original Ampera, which set the benchmark for modern electric cars in 2011. The new Ampera-E combines innovative electric mobility with state-of-the-art connectivity and exciting driving dynamics”. The Ampera was never very successful and was withdrawn from the UK after lacklustre sales.
The Opel Ampera-E is more or less a Bolt EV with new badges, destined for the European market.
This model was announced by GM CEO Mary Barra at the CAR Symposium in Bochum, Germany, though she provided little information besides a couple of renderings. 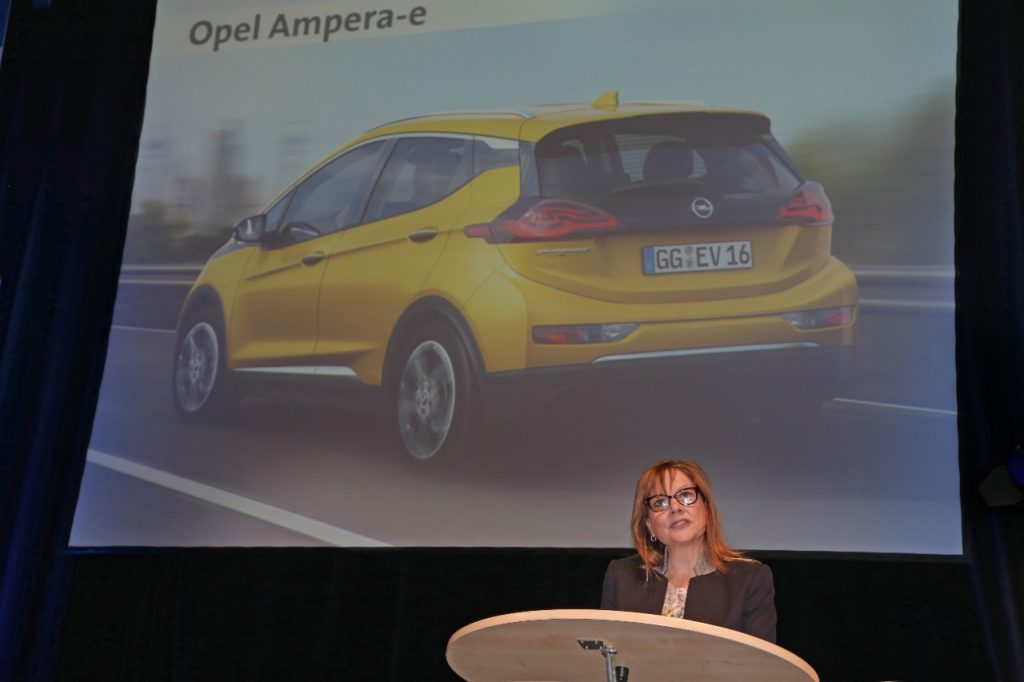 The Ampera-E looks almost identical to the Bolt EV, with what appear to be just a few styling changes.
it’s likely to use the same 197bhp, 266lb ft electric motor and offer the same range of around 200 miles. The Bolt, which was unveiled at this year’s Detroit motor show with great fan fare but little details is claimed to reach 60mph in less than seven seconds.
Performance will presumably be similar to the Chevy as well, although for now GM only says it will “have a longer range on a full charge than most electric cars.”
GM promises a 200-mile range for the Bolt EV in the U.S., though the rated range will likely rise under the test cycles used under the more lax European testing protocol.
In the US the Bolt can be charged from a standard 110 Volt socket in nine hours – a figure likely to be reduced by the 220 Volt European systems.
Opel has so far only confirmed that the Ampera-e will be fed by a flat battery pack mounted underneath the cabin floor. The company says the packaging of the battery allows for “a roomy interior providing comfortable seating for five passengers and trunk space comparable with that of a car in the compact class”.
Opel says the Ampera-e will come with its OnStar infotainment service and smartphone integration.
While Vauxhall hasn’t specified whether the Ampera-E will be launched in the UK, it seems highly likely that it will, given the growing appetite for electric vehicles in this country.

Announcing the Ampera-E in Germany, GM boss Mary Barra said: “GM and Opel have always been convinced that electric cars will play a defining role in future mobility. The game-changing technology of the Ampera-e is a significant step toward realising that vision. Our new battery electric car is also another boost for Opel’s reputation for making innovative engineering widely accessible.”
Opel chief Dr. Karl-Thomas Neumann said: “The new Ampera-e will open the road to electric mobility by breaking down the barriers of high price and short driving range.”

No news of a Bolt waiting list for orders as compared to the Tesla Model 3 with now over 300,000 reservations.