A Kim Price of LA became the first driver of the Mercedes Benz all electric B class. Forty one cars were delivered in the month and Kim an Mercedes driver for 15 years was the first.

Price happened to be in Germany the month before the electric B-Class was officially introduced in the U.S.  “I liked the looks, it was big inside,” it had the luxury Price wanted–“so I called Mercedes-Benz of Laguna Niguel and put down a deposit.” 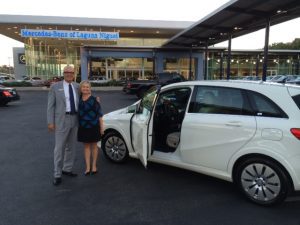 Now that Price has been commuting in her B-Class for a month, she says, “It fits my needs.”

“It’s all electric, and though there’s a capacity of 85 miles on a single charge, that’s a very conservative estimate in my experience.”

Her daily commute traffic ranges from cruising at 75 mph to stop-and-go traffic on the freeway, so access to the carpool lane is hugely important–as California commuters know all too well.

With its regenerative braking and the radar-based adaptive cruise control, Price finds that commuting the 70 miles to work–and starting with an indicated 85-mile range–she often has an indicated 35 miles of charge remaining.

The parking garage in the Sunset Boulevard building where Price works has six 240-Volt Level 2 charging stations. She notes that the smartphone app for her B-Class alerts her when the car has finished recharging–“typically about three hours,” she says.

At that point, she’ll move the car to a non-charging space or, she admits, often call the valet service in the garage and have them move it, to open up the charging station for another user.

The most pleasant surprise of her B-Class has been the high range, Price said. “I’m super-excited” at not having to “squeak by with 5 miles” to spare when she arrives at work.

She also likes “having my trunk back,” given the reduced trunk volume of her plug-in Accord to accommodate the battery pack.

On the downside, she was surprised to learn that her 2014 B-Class didn’t come with Apple CarPlay, announced for the new 2015 C-Class models.

“Plug-in geeks like technology, or at least I do,” said Price. “I want the latest and greatest, so it was kind of a bummer” not to have CarPlay in her electric car.

She would also have liked a sunroof option.

Finally, Price likes the fact that her Mercedes-Benz B-Class isn’t that common a sight on the streets of Southern California.

Mercedes Benz does have a stake in Electric Car maker Tesla so we can assume there is some Tesla engineering in this B class vehicle.

UK sales should start in first Quarter 2015 with a starting price of around £32,000 before any grants.