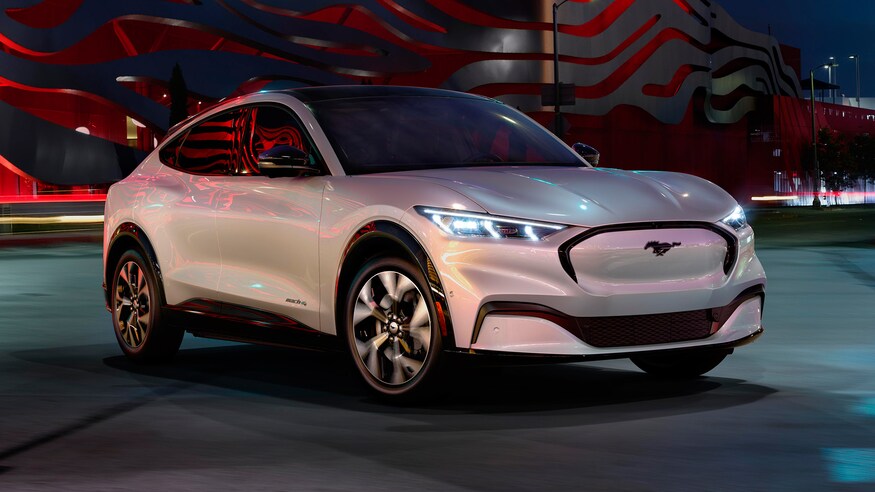 The top-range version of the car can travel up to 370 miles on a full charge and recharge 57 miles (92km) of range in 10 minutes on a high-power charge.

There are buttons in place of conventional door handles and storage space under the front bonnet.

The fastest model can accelerate from 0-60mph in under five seconds. By comparison, the Tesla Model X 100D can do 0-60mph in 4.4 seconds.

Like the Tesla, the Mustang Mach-E has a 15.5in (40cm) touch screen beside the steering wheel.

Mach-E is being built in Mexico and is available to pre-order now and will be sold exclusively online, with first deliveries expected around October next year.

The Ford Mustang Mach-E, is the firm’s first bespoke electrically powered SUV, with styling and – its maker claims – performance inspired by the muscle car.

Murat Gueler, Ford’s European design chief, said the aim was to create “something special that stands out from the crowd”, describing the new machine as “an EV with soul”.

The new electric car has taken the Mustang title as the first step in expanding the nameplate into a full model line. The Mach-E moniker is inspired by the Mach 1 variant of the first-gen Mustang.

The Mustang Mach-E sits on a new Ford EV platform called Global Electrified 2, or GE2 – an extensively reworked version of the C2 architecture used for the latest Focus and Kuga. Gueler said designers had input into setting the platform’s dimensions, both to set the wheelbase and to enable the extended bonnet, which is long for an EV but which was considered an iconic Mustang design feature.

The model will initially be launched with two battery pack sizes and three power outputs. The entry-level version will feature a single motor driving the rear wheels, with either a 75kWh battery and 254bhp motor or a 99kWh battery and 285bhp motor. Both produce 307lb ft, with a claimed 0-62mph time of under eight seconds and WLTP range of around 280 and 370 miles respectively.

The twin-motor all-wheel-drive version is offered with a 75kWh battery and 254bhp, or 99kWh and 332bhp. Both versions provide 429lb ft and a sub-seven-second 0-62mph time, with estimated ranges of 260 and 335 miles. Charging is available through an AC home charger or via DC fast chargers at up to 150kW.

The Ford Mustang Mach-E has been let loose, expanding the legendary pony car nameplate with a performance-oriented electric crossover. It comes out the gate sprinting, chasing toward rivals that thousands have already placed bets on: The Tesla Model 3 and Model Y. Ford’s foray seems directly targeted at Tesla’s midsize sedan and upcoming crossover, with similar dimensions, performance, styling, and pricing. Let’s leave aside philosophical discussions on whether the Mach-E is truly a Mustang and focus on the facts as we compare it against the Tesla twins.

So let’s get into the nitty gritty. The Ford Mustang Mach-E comes with two lithium-ion battery pack options: standard range and extended range. The standard-range version uses a 75.7-kilowatt-hour, 288-cell pack, sending power to a large rear motor, while the extended-range option uses a larger 98.8-kilowatt-hour battery pack with 376 cells, sending power to both a motor at the front axle and rear.

The battery pack gives the Mustang Mach-E a maximum range of up to 300 miles per charge on certain trim levels when equipped with the optional extended-range battery pack and rear-drive layout.

All-wheel-drive models with the same extended-range batteries will see their range drop to 270 miles. The standard-range model with the smaller battery pack and rear-wheel-drive can cover 230 miles, while the same battery pack driving all four wheels drops that figure to 210 miles.

The Mustang Mach-E does come in a many different flavours. But consumers can only choose from two options beginning in 2020: Premium and First Edition. The First Edition model comes with the extended range battery pack and all-wheel drive standard, as well as unique visual treatments like red brake callipers, metallic pedal covers, and unique badging. But those hoping to get the least expensive Mach-E will have to wait until 2021, when the base Mach-E Select arrives.

That more affordable model offers a standard-range battery pack and either rear or all-wheel drive. The more-powerful California Route 1 model, which comes exclusively with extended range and all-wheel drive, won’t be available until early 2021 as well. The range-topping Mach-E GT Performance, the most powerful of the group ( for now), doesn’t go on sale until later in 2021.

Don’t fret, Mustang faithful, performance is still a major part of the Mach-E’s equation. Even with its impressive range and charging capabilities, Ford tells us the Mach-E “still drives like a Mustang.” And has the horsepower of one, too.

The most powerful model, the Mach-E GT Performance, produces 459 horsepower and 612 pound-feet of torque, giving it the ability to hit 60 miles per hour in about 3.5 seconds. But, as mentioned, that model won’t be available until the spring of 2021. Until then, buyers will have to make do with the next quickest models available in 2020: the Premium and First Edition.

With the extended-range battery pack and all-wheel drive, the Premium and First Edition trims produce up to 332 horsepower and 417 pound-feet of torque.

The stretched, revised pony logos on the six-sided grille and trunk lid give away the Mach-E’s family ties. But even the angled LED headlights share something in common with the coupe with which it shares its name, as do the tri-bar taillights. Outside of the obvious crossover cues and four-door setup, there are few areas where the Mach-E stands out next to its sibling.

For one, the Mach-E has no door handles. Instead, there are pillar-mounted buttons that pop the doors open upon pressing them, and a pull handle on the front driver and passenger sides. The rear doors, for whatever reason, don’t get a pull handle. And the wheels don’t carry over from the coupe, either. Each version of the Mach-E gets its own 18-, 19-, or 20-inch wheel designs.

You can put down a reservation for the Mustang Mach-E right now, but there’s a little catch. At this point, you can only place a £1,000 deposit for the limited First Edition model, which has an estimated starting price of £58,000, the AWD model, which starts at an estimated £46,000 or the Mach -E standard model from £40,270.

The Mustang Mach-E First Edition comes nicely loaded with features such as red brake callipers, sports pedals with metallic covers, scuff plates marked ‘First Edition,’ and contrasting stitching for the seats. The launch variant of the EV is available exclusively with the optional extended-range battery and all-wheel-drive, which results in an estimated range of up to 335 miles (540 kilometers) between charges. The performance is a little on the non-racy side with a 0 – 60 MPH posted at less than 7 seconds.

We assume these UK models are Right Hand Drive. Ford has ofered previous Mustangs in the UK but most until very recently were US left hand drive versions. The curent range including the V8 and Bullitt are Right hand drive.

The 2020 Mustang Mach-E is not only the first four-door Mustang, but it’s also the first Mustang crossover, which will irk two-door Mustang fans. But the Mach-E now pits the Mustang name against a new cast of competitors that aren’t from just Dodge or Chevy. Ford is now competing against other electric vehicles from the likes of Mercedes, Jaguar, and Tesla.

It appears the Mach-E is competing against Tesla Model Y in price, performance, and more; however, neither of them are on sale yet. That means some specs could change before production begins, including the Mustang’s impressive performance numbers.

The styling strongly links the EV to the regular Mustang, reflected in features such as the badge and front and rear lights, as well as several lines along the bodywork. Gueler said: “The approach was to put this car in a unique spot: only Ford can do Mustang. In the next few years there will be hundreds of EV nameplates, but with Mustang we can load up with emotion and drama.”

The car lacks conventional door handles, instead featuring buttons that pop open the doors and small holds protruding from the front doors. Owners can use their smartphones as keys, or use a keypad built into the B-pillar.

The Mustang Mach-E sports a more radical interior, with a wide dashboard featuring a Mustang ‘double cowl’ and built-in soundbar. The dash is dominated by a Tesla-style vertically mounted 15.5in touchscreen with a rotary dial fixed onto it using special glue. Many of the car’s systems are controlled through the screen, which uses a new Sync 4 operating system that can accept over-the-air updates. There is also a 10.2in digital cluster for the driver, while the steering wheel retains a number of physical controls.